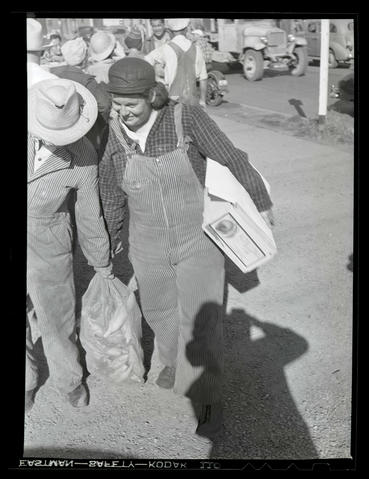 Photograph showing two workers carrying produce during a market at the Albina Engine & Machine Works shipyard in Portland on Wednesday, September 8, 1943. Farmers brought produce to the shipyard and sold directly to workers. A cropped version of this photograph and image No. 375A0765 may have been published together in the Oregon Journal on Thursday, September 9, 1943. The photographs had the following caption: “WAR WORKERS HAD A FIELD DAY between shifts Wednesday at Albina Engine & Machine works when they carried off armloads of fresh produce from their ‘Hellship Market.’” This photograph had the following additional caption information: “Couple carrying a sack of corn and a lug of peaches.” Image note: The text “Albina public market / 9/9/43” is written on the negative sleeve. See related image Nos. 375A0350, 375A0759, 375A0760, 375A0762, 375A0763, 375A0764, and 375A0765. Caption information and publication date from print in related collection, Org. Lot 512, Albina Engine & Machine Works photographs, folder 1/7.