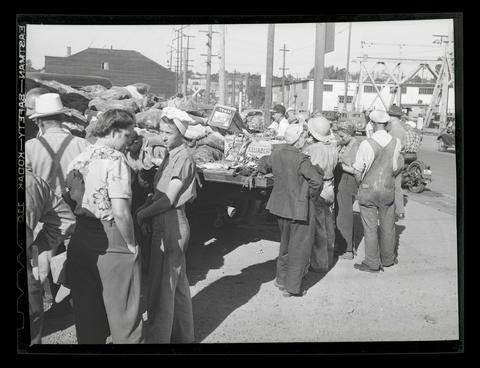 Photograph showing workers gathered around flatbed trucks loaded with produce during a market at the Albina Engine & Machine Works shipyard in Portland on Wednesday, September 8, 1943. A cropped version of this photograph was published in the Oregon Journal’s final edition on Thursday, September 9, 1943, on the front page of Section 2. The photograph had the following caption: “WHO SAID THERE’S A SHORTAGE?—War workers at Albina Engine & Machine works crowded around loaded farmers’ trucks Wednesday and purchased corn, carrots and peaches as Oregon growers attempted to end profiteering.” The photograph accompanied a story headlined “Farmers Sell Produce on ‘Hellship Market.’ “ Image note: The text “Albina public market / 9/9/43” is written on the negative sleeve. See related image Nos. 375A0350, 375A0759, 375A0761, 375A0762, 375A0763, 375A0764, and 375A0765.