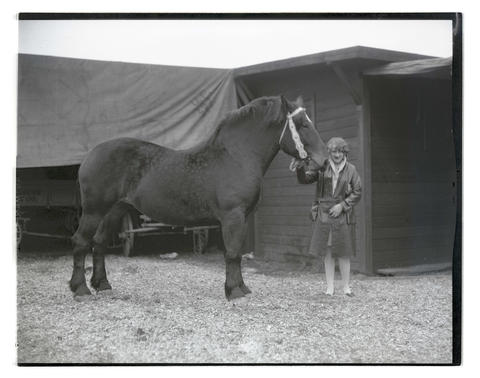 Photograph of Wilma Hofstra standing next to a Belgian draft horse outside a building at the 1928 Pacific International Livestock Exposition in Portland. The number 9 is written on the negative and is partially visible in the upper right corner of the image. A cropped version of this photograph, along with image Nos. 374N0844 and 374N0850, was published on Page 2 of the Oregon Journal on November 4, 1928. The photographs were published together under the headline “Among Blue Bloods at Stock Show.” This photograph had the following caption information: “ ‘Henrietta,’ grand champion Belgian mare, won first prize at Washington State fair in 1926, owned by David Rankin Yakima, Wash. Wilma Hofstra is holding the tether.”