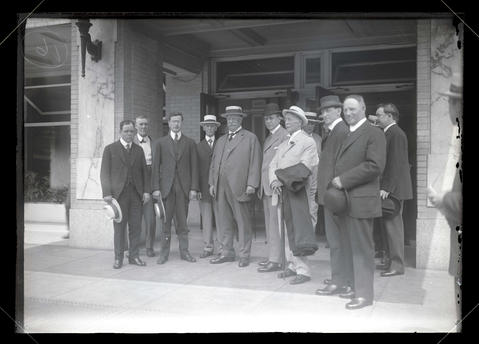 Full-length portrait of William Howard Taft (fifth from left) with a group of men outside the Multnomah Hotel in Portland on Sunday, August 22, 1915. Standing nearest to Taft are members of the reception committee that greeted him when he arrived in Portland. To the left of Taft, in a hat, is Charles H. Carey, president of the Oregon Bar Association. To the right of Taft are Judge George N. Davis and J. N. Teal (wearing glasses and holding coat and umbrella. The other men in the photograph are unidentified. According to two front-page stories in the Oregon Journal on Monday, August 23, 1915, Taft spoke at a Portland Press Club luncheon and the first joint convention of the Oregon and Washington bar associations. He departed on the afternoon of Monday, August 23. See related image Nos. 373G0202, and 373G0203. Image note: The numbers 538 and 16 are written on the negative and are visible at the top of the image.