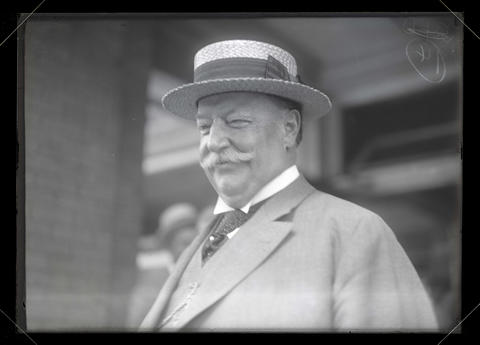 Head and shoulders portrait of William Howard Taft outside the Multnomah Hotel in Portland on Sunday, August 22, 1915. He is smiling and facing to the left. During his visit, Taft spoke at at a Portland Press Club luncheon and the first joint convention of the Oregon and Washington bar associations, according to two front-page stories in the Oregon Journal on Monday, August 23, 1915. Taft departed on the afternoon of August 23. See related image Nos. 373G0201 and 373G0202. Image note: The number 14 is written on the negative. The number 540 was written on the negative and crossed out. The writing is visible in the upper right corner of the image.