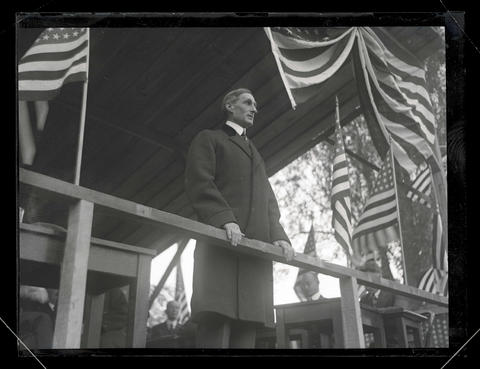 Photograph, taken on Wednesday, October 10, 1917, showing United States treasury secretary William Gibbs McAdoo speaking on a flag-draped platform in Portland during a ceremony to lay the cornerstone for a new post office at Park and Glisan (now NW Park Avenue and NW Glisan Street). A cropped and reversed version of this image was one of two photographs of McAdoo’s address that were published on the front page of the Oregon Journal that day. The two photographs were published beneath the following caption: “William Gibbs McAdoo, secretary of the treasury, addressing throng in the North Park blocks this morning in celebration of laying cornerstone for new Portland postoffice. The event opened the busy day for the head of the nation’s financial affairs in urging renewed vigor for Liberty Loan. Picture at right [referring to this image] shows Secretary McAdoo “close up” in characteristic speaking pose.” The photographs accompanied three stories about McAdoo’s visit: One headlined “Says We’ll Make Kaiser Bill Look Like 30 Cents”; one headlined “Sec. M’Adoo Speaks to Crowd at Laying of the Cornerstone”; and one headlined “Secretary M’Adoo Comes Here to Urge Liberty Bond Sales.”