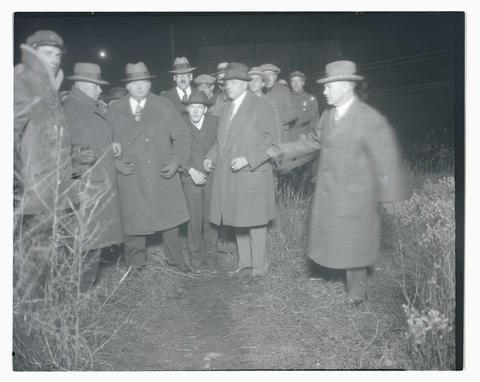 William Edward Hickman with police during extradition to California

Photograph of William Edward Hickman (center, handcuffed to third man from left) in Portland on Sunday, December 25, 1927, as Los Angeles police escorted him from Pendleton, Oregon, to California to face charges in the mid-December murder of 12-year-old Marion Parker. Hickman was captured by Pendleton Police Chief Tom Gurdane and state traffic officer Buck Lieuallen near Echo, Oregon, on December 22, 1927. A cropped and reversed version of this photograph was published on the front page of the Oregon Journal on Monday, December 26, 1927. The photograph had the caption: "The prisoner securely handcuffed as he alighted from train at Montavilla Sunday evening." This photograph was published under the headline "Hickman Started On Return to Scene of Atrocious Crime," along with image Nos. 371N1116, 371N3581, and several other photographs. The photographs accompanied a story titled "Hickman in California; Calm Again." Hickman was tried and convicted in California in early 1928, and he was executed that October. Also see image Nos. 371N1116, 371N3566, 371N3569, 371N3580, 371N3580A, 371N3581, 371N3590, and 373G0076.