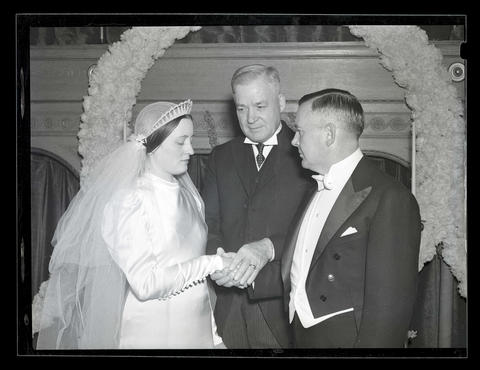 Photograph of Myrtle Cradick, the Rev. William G. Everson, and Portland Mayor Joseph K. Carson at the altar on Cradick and Carson’s wedding day, Saturday, June 19, 1937. The ceremony was held at the First Baptist Church (also known as the White Temple) in Portland. A cropped version of this photograph and image No. 372A0112 were published on the front page of the Oregon Journal on Sunday, June 20, 1937, under the headline “The Mayor and Portland Gain First Lady.” This photograph had the following caption: “The Rev. William G. Everson, pastor of White Temple church, blesses the union of Mayor Joseph K. Carson and Miss Myrtle Cradick at the wedding rites Saturday night.” See additional related image Nos. 372A0107, 372A0108, 372A0109, 372A0110, and 372A0111.