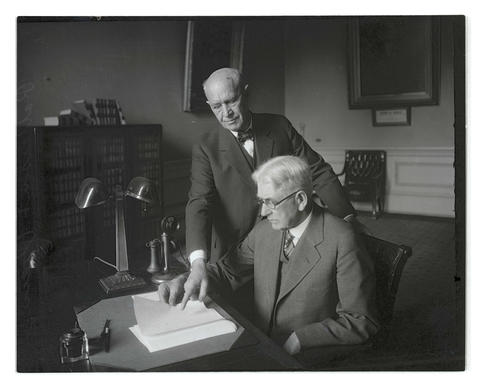 Portrait of outgoing governor Walter M. Pierce (left) and his successor, Isaac L. Patterson, in the governor’s office at the Oregon State Capitol. Patterson is sitting at the desk in the office and is looking at a document in front of him. Pierce is standing beside Patterson and pointing at the document. A cropped version of this photograph was published on the front page of the Oregon Journal on Monday, January 10, 1927, the day Patterson was inaugurated. The photograph was published under the headline “Change of State Pilots” and had the following caption: “Walter M. Pierce turns over desk in executive office of the state capitol which he has occupied as governor for the past four years to his successor, Isaac L. Patterson.” The photograph accompanied two stories, one headlined “Patterson Becomes Governor,” and the other headlined “Patterson - Pierce Messages Afford Striking Parallels.” See related image Nos. 371N1959, 371N1961, 371N1963, 371N1964, 371N1968, and 371N1969. Image note: The text “Patterson + Pierce” is written on the negative and is faintly visible on the left side of the image.