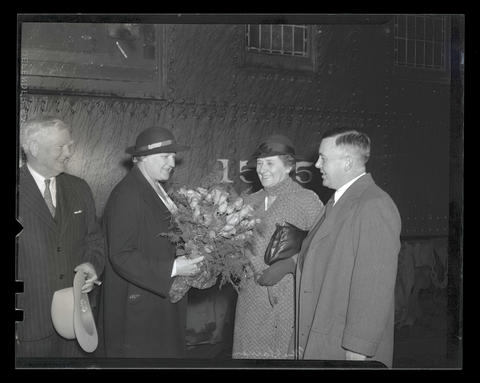 Photograph of (from left) United States Vice President John Nance Garner; Laura McDonald of the Women’s Advertising Club; Ettie Garner, wife of the vice president; and Portland Mayor Joseph K. Carson. McDonald is presenting Ettie Garner with a bouquet of roses. The photograph was taken at Union Station on October 14, 1935, when the Garners made a brief stop in Portland on their way to Seattle and then the Philippines. See related image Nos. 372A0215, 372A0216, and 372A0217. Image note: The text “Mrs Garner” is written on the negative and is visible at the bottom of the image.