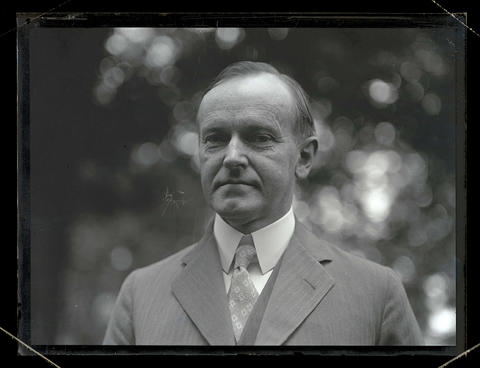 Head and shoulders portrait of Vice President Calvin Coolidge, facing front, at a groundbreaking ceremony for the Theodore Roosevelt statue in Portland’s south park blocks on August 15, 1922. Coolidge spoke at the ceremony and performed the groundbreaking. A cropped version of this photograph was one of four, including image Nos. 373G0037 and 379G0023, that were published on Page 7 of the Oregon Journal city edition on Wednesday, August 16, 1922. The photographs were published under the headline “When The First Earth Was Turned.” This photograph had the following caption: “Vice President Calvin Coolidge, who was Portland’s guest for three happy days.” See additional related image Nos. 373G0031, 373G0034, 373G0035, and 373G0036.