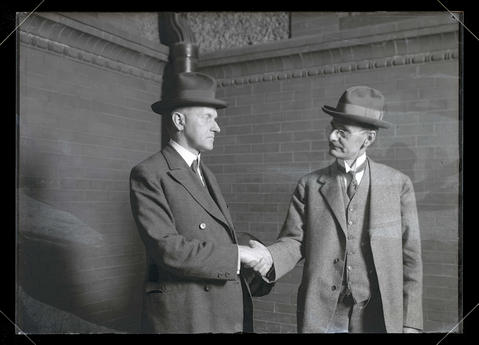 Half-length portrait of Vice President Calvin Coolidge (left) shaking hands with an unidentified man. The photograph was taken in Portland on Saturday, August 12, 1922. A cropped version of this photograph was published on the front page of the Oregon Journal on Sunday, August 13, 1922, under the headline “Vice President Coolidge.” The photograph had the following caption: “Calvin Coolidge, vice president of the United States, photographed on his arrival in Portland for a three days’ visit. He was accompanied by Mrs. Coolidge and their two sons and Mr. and Mrs. Frank W. Stearns of Boston.” See related image Nos. 373G0031, 373G0032, 373G0034, 373G0035, 373G0036, and 373G0037, also taken during Coolidge’s visit to Portland. Image note: Smudges on negative.