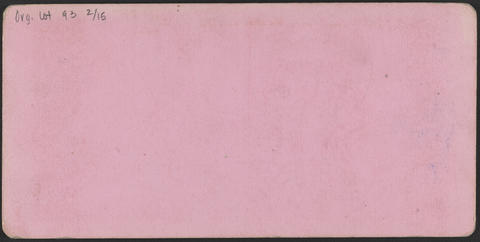 Carleton E. Watkins, renowned nineteenth-century photographer of the American West, began his career in photography in 1854 at the age of 25. Born in Oneonta, N. Y. in 1829, Watkins relocated to California in the spring of 1851 and by 1853-1854 was living in San Francisco. There he was taught the art of photography by Robert Vance (1825-1876), owner of daguerreotype studios in San Francisco and San Jose. By 1856, Watkins had moved on to work as an ambrotypist in the portrait studio of James M. Ford (1827-circa 1877) in San Jose.

Sometime between 1856 and 1858, Watkins began operating as a freelance photographer in the San Jose and San Francisco areas and experimented with large-format outdoor photography using wet-plate collodion negatives. His largest surviving body of work prior to 1861 documents Las Mariposas, the California mining estate of Col. John C. Frémont. In 1861, Watkins traveled to Yosemite with a mammoth-plate camera. The thirty mammoth plates and one hundred stereoscopic negatives that he made during this trip were partly responsible for government protection of Yosemite as a national park and were published in Josiah Whitney’s The Yosemite Book in 1869, one of the first American books devoted solely to landscape photography. Watkins returned to Yosemite many times between 1861 and 1881 to photograph the park and even set up his own gallery there to showcase and sell his photography.

In 1865, Watkins opened his "Yo Semite Gallery" at 425 Montgomery Street in San Francisco. That same year, he won an award for "Mountain Views" at the San Francisco Mechanics' Institute Industrial Exhibition and, in 1867, won a bronze medal for his mammoth plates of Yosemite at the Paris International Exposition, earning him an international reputation as a landscape photographer. In July of that same year, Watkins traveled to Oregon to photograph Portland, Or. and the Columbia River area. Beginning in Portland, Watkins traveled south to Oswego and Oregon City on the Willamette River to photograph the area and north again across the Columbia to Vancouver in the Washington Territory. He then traveled east along the Columbia River, following the trade route of the Oregon Steam Navigation Company, finally leaving Oregon in November of 1867 with fifty-nine mammoth plates and one hundred stereograph negatives. Fifty of these mammoth views were exhibited in Portland in 1868 at Shanahan’s Art Gallery, garnering Watkins much acclaim. He also won the top award that year for a major exhibit of Pacific Coast photography at the San Francisco Mechanics’ Institute Industrial Exhibition.

In 1875, financial troubles and a nationwide economic slump caused Watkins to lose his studio in San Francisco, his gallery in Yosemite, and the entire collection of what is now known as his “Old Series” negatives. His business was sold to Isaiah W. Taber, who continued to print these negatives under his own studio imprint. However, by 1876, Watkins was up and running again, determined to re-photograph many of his famous views for what he called his “New Series of Pacific Coast Views.” As part of this series, Watkins made a return trip to Oregon in 1882, stopping at Portland and the Columbia River before continuing north to photograph the Puget Sound area of the Washington Territory and Victoria, British Columbia. He returned to Oregon again in 1883 to photograph Cascade Locks on the Columbia River, as well as other features of the river valley, and again during the winter of 1884-1885, when he photographed a winter blizzard that snowed in an Oregon Railway and Navigation Railroad train on its tracks in the Columbia River Gorge.

Carleton Watkins continued to photograph until the early 1890s, when his health began to fail. For the rest of his life, he lived in near blindness and poverty. All of his negatives were destroyed in the April 1906 earthquake and fire in San Francisco. For the next decade, Watkins lived under the custody of his daughter and the Napa State Hospital for the Insane and died on June 23, 1916. His photographs remain some of the earliest and most well-regarded visual records of the landscape of the American West and its early settlement.

Stereograph of gulls, shags, and murrs on Farallon Island off the coast of San Francisco, California.