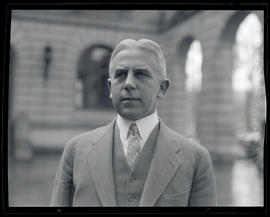 Head and shoulders of a man facing front and looking slightly to the left. He is outside a building and is wearing a suit jacket and vest, a collared shirt, and a tie. The name “Major R T Coiner” is written on the negative and is visible on the right side of the image. The man is probably Major Richard T. Coiner of the Army Corps of Engineers, who served as district officer of the second Portland district from 1924 to 1927.