1 Collections results for Tuskan (Or.) 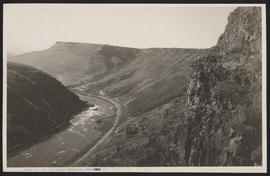 Photograph showing the railroad tracks of the Oregon Trunk Railway next to the Deschutes River at the base of the Deschutes River Canyon near Tuskan, Wasco County, Oregon. Taken from a hillside above the river. On the right, R.H. Crozier holds a walking stick and sits on the edge of a steep, rocky cliff. Crozier was an official with SP&S Railroad. Handwriting on the back of the print reads, "Deschutes River Canyon. Tuscon (sic), Ore. Oregon Trunk Railway, 1912. R.H. Crozier on cliff, right." Stamps on the front and back indicate a 1911 copyright by Kiser Photo Co. for SP&S Railway.