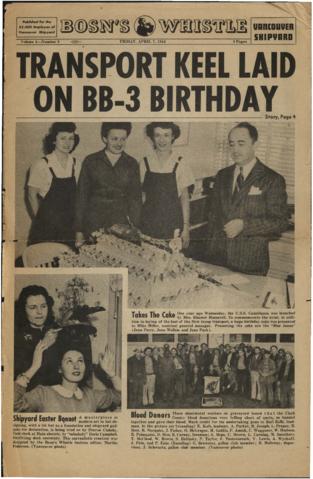 Employee newspaper for Vancouver Shipyard covering shipyard productivity and current projects, safety and injury reports, war bond drives, employee sports leagues, award recipients, and human-interest stories. Topical coverage in this issue includes: “Transport Keel Laid on BB-3 Birthday”; “Blood Bank Donation Requires Only 45 Minutes” photo essay about the process of donating blood for the Red Cross; An accounting of Gwen Dew’s experiences in a Japanese prison camp; “Liberty Ship Hearing Testimony Favorable” article about Truman War Investigation committee hearing regarding structural failure in Liberty Ships; A photo essay about proper lifting techniques to avoid strained backs; An article celebrating the first anniversary of the launch of the U.S.S. Casablanca, the first carrier built in the Vancouver shipyard; A profile of Walter Tinkham, who started work as a day rigger after being discharged from the army due to injury; An article encouraging people to sign up for a Victory Garden plot in the community gardens at McLoughlin Heights; An article reminding readers that a license from the Washington or Oregon State Game Commission is required to go fishing; Photographs of the top welding crews who won awards for achievement in the Vancouver shipyard.