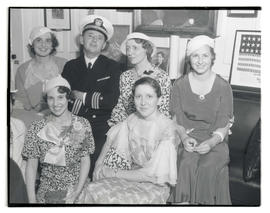 Portrait of the commanding officer of the frigate USS Constitution, members of his family, and others at a tea on Friday, August 18, 1933. The tea was held during a three-week visit to Portland by the ship and its crew. A cropped version of this photograph was one of four that were published on Page 4 of the Oregon Journal on Sunday, August 20, 1933, under the headline “No Dull Moments on Deck of Old Frigate Constitution.” This photograph had the following caption: “Group at Friday tea, in front row from left are Phylis Drake and Grace Gulliver and in rear row Marion Bass, Commander [Louis J.] Gulliver, Mrs. Gulliver and Marjorie Bass.” Also see image Nos. 371N3717, 371N3730, and 371N3736, which were published with this photograph.