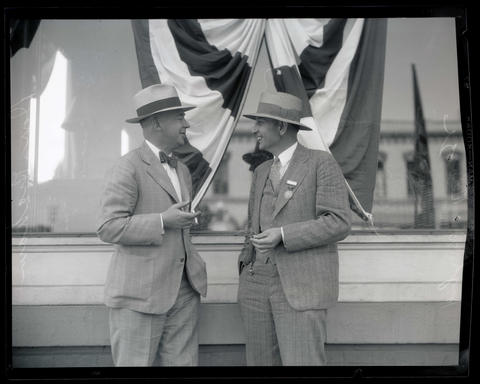 Photograph showing two men facing each other, smiling, and holding cigarettes. Both are wearing hats and suits. They are standing in front of a window draped with bunting. A cropped version of this photograph was one of eight that were published on Page 1 of the Oregon Journal on August 8, 1929, under the headline “Legion Hosts Answer Roll-Call At Salem.” The photographs had the following caption: “Oregon’s capital city today and for the rest of the week will be in the hands of American Legionnaires meeting annual state convention.” This photograph had the following additional caption information: “Don Graham, Prineville, left, and Syd S. George, Eugene, both mentioned for state commander.” Also see image Nos. 371N0841, 371N0892, 371N1702, and 371N2685, which were published with this photograph, and image No. 371N0915. Image note: The name “Don Graham” is written on the negative next to the man on the left, and the name “Syd S. George” is written on one edge of the negative next to the man on the right. The writing is visible in the image.