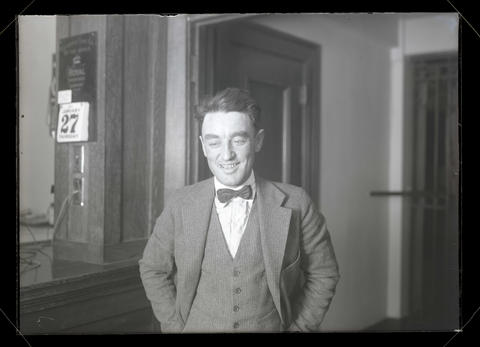 Half-length portrait of George Billings facing front and smiling at the Multnomah County Jail. Billings was a suspect in a burglary case. A cropped version of this photograph was published on Page 4 of the Oregon Journal on Thursday, January 27, 1921, under the headline “Held On Crime Charges.” The photograph had the following caption: “George Billings, alias Joe Brady, photographed in cell at county jail this morning, after refusal of Captain Harry Circle of police detective department to allow such picture taken Wednesday in the city jail, despite orders from Chief Jenkins that photographers be allowed to pose prisoner. Brady was affable and chatty making no objection to flashlight.” The photograph accompanied the continuation of a front-page story headlined “Brady Says He’s Goat; 2 Identify Him.” On Sunday, March 5, 1921, the Journal reported that a grand jury had indicted Billings on three charges. Subsequently, on Friday, April 15, 1921, the Journal reported that a jury had acquitted Billings of one charge and the other two indictments had been dismissed. Image note: The text “Brady, Joe / Billings” is written on the negative sleeve.