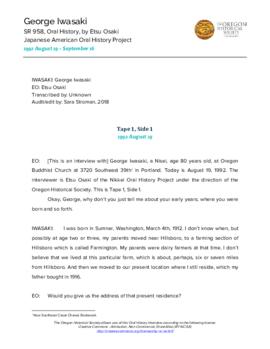 George Iwasaki was born in Sumner, Washington, in 1912. His parents had immigrated to the United States from Shiga Prefecture, Japan, and his family became farmers in the Hillsboro, Oregon, area. In 1942, he and Tomiko Natsuhara were married; they later had five children. Also in 1942, the Iwasaki family was among Japanese Americans ordered to the Portland Assembly Center by the U.S. government. The government gave them the option to work as farm labor, and they spent much of World War II working fields near Nyssa, Oregon. After the war, they were able to recover their farm in Hillsboro. In the 1960s, the farm rebranded as Iwasaki Bros. and became one of the leading bedding plant producers in Oregon. George Iwasaki died in 2009.

In the first interview session, conducted on August 19, 1992, Iwasaki discusses his family background and early life on a farm in Hillsboro, Oregon. He talks about the Japanese-American community in Oregon and about his education. He then discusses working on the family farm during the Depression, his marriage to Tomiko Natsuhara, and the lead-up to the U.S. government's incarceration of Japanese Americans during World War II, including making arrangements for the family farmland. He talks about his family's experiences while they were detained at the Portland Assembly Center and about accepting the option to work as fieldworkers in Nyssa, Oregon, including living conditions in the agricultural camp run by the Farm Security Administration. He then discusses returning to Hillsboro after the family's release in 1945.

In the second and final interview session, conducted on September 16, 1992, Iwasaki continues discussing the family's return to Hillsboro after their release in 1945, and describes how the family recovered their farmland and restarted their business. He talks about the evolution of the family farming business, now known as Iwasaki Bros., to focus on bedding plants. He also speaks about his involvement in Japanese American community organizations, including the Oregon Buddhist Church. He closes the interview by talking about his children, their families, and their careers.

Copyright for this interview is held by the Oregon Historical Society. Use is allowed according to the following statement: Creative Commons - BY-NC-SA, http://creativecommons.org/licenses/by-nc-sa/4.0/