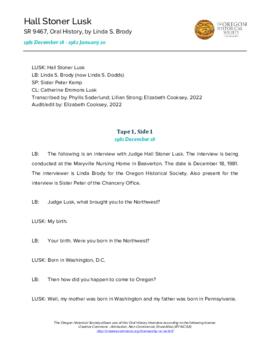 Hall Stoner Lusk was born in Washington, D.C., in 1883. He attended Georgetown University, where he earned an undergraduate degree in 1904 and a bachelor of laws degree in 1907. He worked as a law clerk for the D.C. Court of Appeals from 1906 until 1909, when he came to Portland, Oregon, to practice law. In 1914, he and Catherine Emmons, the daughter of his law partner, were married; they later had five children. He served as an assistant U.S. attorney from 1918 to 1920, then returned to private practice. He represented the Society of Sisters, and wrote their brief in the United States Supreme Court case Pierce v. Society of Sisters of the Holy Names of Jesus and Mary, which overturned the 1922 Oregon Compulsory School Bill. Lusk served as a judge on the Multnomah County Circuit Court from 1930 until 1937, when Governor Charles Martin appointed him to the Oregon Supreme Court. Lusk remained on the Supreme Court until 1960, when he briefly served in the United States Senate, filling the vacancy left by Richard L. Neuberger's death. He returned to the Oregon Supreme Court in 1961 and served as a justice pro tempore until 1968. He died in 1983.

In the first interview session, Lusk discusses coming to Portland, Oregon, from the East Coast in 1909 and his impressions of Oregon. He talks about practicing law in Portland and his marriage to Catherine Emmons. He discusses handling the case of the 1922 Oregon Compulsory School Bill and arguing before the U.S. Supreme Court.

In the second interview session, Lusk discusses serving as a judge on the Multnomah County Circuit Court and as a justice on the Oregon Supreme Court, as well as serving in the U.S. Senate for a few months in 1960. He closes the interview by talking about working with Senator Wayne Morse.