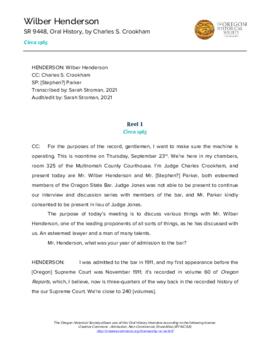 Wilber Henderson was born in Georgetown, Illinois, in 1887. He graduated from Colorado College in Colorado Springs, Colorado. He earned a law degree from Washington University in 1911, passed the Oregon bar exam that same year, and began practicing law in Portland, Oregon. He served in the U.S. National Guard and was activated in 1916 to serve in the Oregon Cavalry on the Mexico border during the Mexican Border War. He served as a member of the infantry during World War I. From 1927 to 1929, he represented Multnomah County in the Oregon House of Representatives. He and Margaret J. Welch Loeding were married in 1931. He was legal counsel for Governor Earl Snell, and later for the Oregon Humane Society. In 1962, he was awarded a medal by the American Humane Association for service to "all living creatures." He died in 1966.

This oral history interview with Wilber Henderson was conducted by Charles S. Crookham in Crookham's chambers at the Multnomah County Courthouse in Portland, Oregon, around 1965. The date is given as September 23. Stephen Parker was also present. Parker's name was given in the audio, but not spelled. The spelling of his name cannot be verified.

In this interview, Henderson speaks at length about his involvement in a balloon race during the 1914 Rose Festival in Portland, and his experiences of being lost in the woods after an emergency landing. He then discusses his military service during the Mexican Border War. He closes the interview by discussing how he earned the nickname Major.

Copyright for this interview is held by the Oregon Historical Society. Use is allowed according to the following statement: Creative Commons - BY-NC-SA: http://creativecommons.org/licenses/by-nc-sa/4.0/