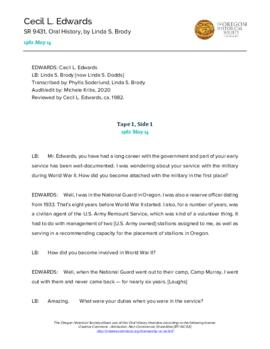 This oral history interview with Cecil L. Edwards was conducted by Linda S. Dodds at the Oregon Historical Society in Portland, Oregon, on May 14, 1982. At the time of the interview, Dodds' name was Linda S. Brody.

In this interview, Edwards discusses his duties regarding the selection of horses as a civilian agent for the Remount Service during World War II. He talks about the history of the American Remount Service and how the horses were used during both war and peacetime. He also discusses his duties selecting dogs for military use. He then talks about serving on the Oregon Racing Commission under Governor Douglas O. McKay after the war. He briefly describes lobbying for the Oregon State Cattlemen's Association and working as chief clerk of the Oregon House of Representatives. He then speaks at length about his experiences as secretary of the Senate. He talks about the changes in the Legislature during the 20th century, including salaries, staff sizes, and session length. He tells the story of discovering that the federal government owed a debt to Oregon dating back to the Civil War. Edwards talks about the fire that destroyed the Capitol building in 1935, the places where the Legislature convened afterwards, and the construction of the new Capitol. He closes the interview by talking a little about some of the governors he served under.

Copyright for this interview is held by the Oregon Historical Society. Use is allowed according to the following license: Creative Commons, BY-NC-SA: http://creativecommons.org/licenses/by-nc-sa/4.0/

Incomplete transcript (28 pages) is available for in-person use at the Oregon Historical Society Research Library.