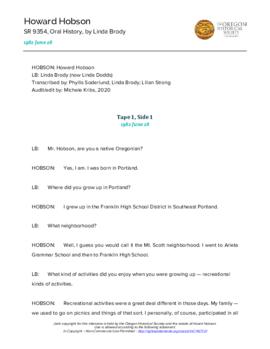 Howard Andrew "Hobby" Hobson was born in Portland, Oregon, in 1903. He was a basketball player and a coach of college football, basketball, and baseball. He attended the University of Oregon with the intent to study law. After being told by the dean of the law school that he would have to choose only one sport to play, he switched his major to economics with a minor in education. Just before his graduation in 1926, he and Jenny Christin Noren were married; they later had two children. In 1949, he earned a master's degree from Columbia University. Hobson was head basketball coach at Southern Oregon University from 1932 to 1935, at the University of Oregon from 1935 to 1947, and at Yale University from 1947 to 1956. He was also head football coach at Southern Oregon University from 1932 to 1934, and head baseball coach at the University of Oregon from 1936 to 1947. In 1945, he earned a doctorate from Columbia University. He was president of the National Association of Basketball Coaches in 1948, spent 12 years on the U.S. Olympic Committee, including four years as chairman, and in 1952, managed the U.S. Olympic basketball team at the Olympic Games in Helsinki, Finland. He died in 1991.

This oral history interview with Howard Hobson was conducted by Linda S. Dodds from June 28 to July 2, 1982, at Hobson's home in Portland, Oregon. At the time of the interview, Dodds' name was Linda S. Brody.

In this interview, Hobson discusses his early life in Portland, including his interest in athletics. He talks about attending the University of Oregon, particularly his involvement in college sports. He discusses studying at Columbia University in New York, New York, including his social life, playing local sports, and returning to Portland. He speaks at length about his career as a college football, baseball and basketball coach, particularly at the University of Oregon. He also briefly talks about his reasons for leaving Oregon to coach at Yale University, his work on the Olympic committee, and working for Ronald Press Publishing Company in New York. He closes the interview by discussing changes in the game of basketball, his writing projects, and awards he has received.

Joint copyright for this interview is held by the Oregon Historical Society and the estate of Howard Hobson. Use is allowed according to the following statement: In Copyright – Non-Commercial Use Permitted, http://rightsstatements.org/vocab/InC-NC/1.0/