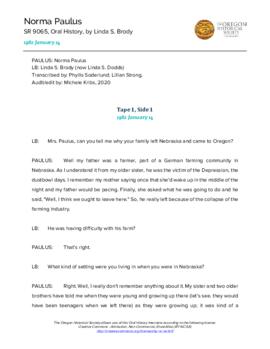 Norma Paulus was born in Nebraska in 1933. Her family relocated to escape the Dust Bowl, eventually settling in Burns, Oregon in 1938. After graduating high school, she got a job as secretary to the District Attorney of Harney County. After moving to Salem and working as a secretary for Judge Latourette, she decided to go to law school at the age of 24. She took night classes at Lewis and Clark College and graduated in 1962. She passed the Oregon State Bar the same year. She met her husband, Bill Paulus, while she was at law school and they married in 1958. She was an appellate lawyer in Salem, Oregon, and argued before the Oregon Supreme Court. She was appointed to the Marion County Boundary Commission by Governor Tom McCall in 1969, which was the beginning of her political career. She represented Marion County in the Oregon House of Representatives, from 1970-1976. She then served as Oregon's first woman Secretary of State from 1977-1985. She also ran unsuccessfully for governor in 1986. She was then appointed to the Northwest Power Planning Council, from 1987-1990, then served as Superintendent of Public Instruction from 1990-1999. She later served as the executive director of the Oregon Historical Society from 2000 to 2003. She died in 2019.

This oral history interview with Norma Paulus was conducted by Linda S. Dodds in the Capitol Building in Salem, Oregon, on January 14, 1982. At the time of the interview, Dodds' name was Linda S. Brody.

In the interview, Paulus discusses her family background and early life, particularly how her family was affected by the Depression. She talks about leaving Nebraska for Oregon due to the Dust Bowl drought, picking hops as seasonal workers, and growing up on an oil rig in Burns, Oregon. She talks about being unable to afford college even with scholarships, working for the Harney County district attorney, and moving to Salem to work as a legal secretary. She also describes having polio at age 19. She then talks about working as a legal secretary for the Oregon Supreme Court, her involvement with the Pentacle Theatre in Salem, and her studies at Willamette University Law School. She discusses working for state Senator Wally Carson. She then talks about running for the Oregon House of Representatives in 1970 and the opposition she faced due to her gender; learning about and embracing feminism; and other women in the Legislature. She closes the interview by talking about her decision to run for Oregon secretary of state in 1976.

Incomplete transcript (32 pages) is available for in-person use at the Oregon Historical Society.