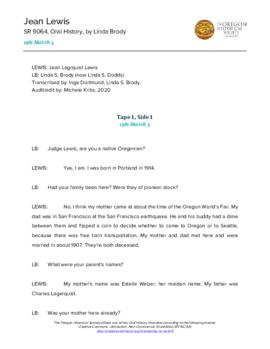 Jean Lagerquist Lewis was born in Portland, Oregon, in 1914. At age 12, she decided that she wanted to become a lawyer. She earned a law degree from Northwestern College of Law in 1938 and passed the Oregon bar exam in 1939. She opened a private practice law firm in Portland later that year. In June 1940, she and Hank Lewis were married before he was deployed overseas during World War II. They later had one child. From 1943 to 1945, she worked on the staff of the U.S. Treasury General Counsel in Washington, D.C. She returned to Portland in 1946 and reopened her law office. She was a Democrat and served in the Oregon House of Representatives from 1954 to 1956, and in the Oregon Senate from 1957 to 1961. She also managed Wayne Morse's 1956 campaign for the U.S. Senate. She became the first woman Circuit Court judge in Oregon when Governor Mark O. Hatfield appointed her to the Multnomah County Circuit Court in 1961. She served on the court until her retirement in 1978. She died in 1991.

This oral history interview with Jean L. Lewis was conducted by Linda S. Dodds in Portland, Oregon, on March 5, 1981. At the time of the interview, Dodds' name was Linda S. Brody.

In this interview, Lewis discusses her family background and early life in Portland, Oregon. She briefly talks about studying at Northwestern College of Law, practicing law in Portland, and working on the staff of the U.S. Treasury General Counsel in Washington, D.C., during World War II.

She discusses serving in the Oregon House of Representatives from 1954 to 1956, and in the Oregon Senate from 1957 to 1961. She talks about legislation she worked on, including on capital punishment, education, government transparency, and carnival safety. She also talks about her experiences as a woman in the Legislature, and as the first woman to serve on the Ways and Means Committee and the Emergency Board.

Lewis talks about serving as a judge on the Multnomah County Circuit Court from 1961 to 1978. She describes her experiences as the first woman to serve on a circuit court in Oregon. She talks about specializing in domestic cases and about some of the cases she presided over, including cases on allowing single fathers to adopt children. She briefly lists some of the organizations she's been involved with. She closes the interview by talking about her reasons for retiring in 1978.