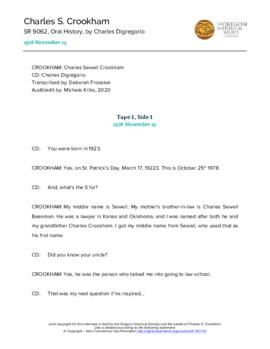 Charles Sewell Crookham was born in Portland, Oregon, in 1923. He attended Oregon State College (now Oregon State University) from 1941 to 1943. He was enrolled in the Reserve Officer Training Corps, and was called to active duty in 1943. He served in the U.S. Army in France during World War II. After his discharge, he attended Stanford University, where he earned a bachelor's degree in political science in 1948. He began studying law at Stanford University, then completed his law degree at Northwestern College of Law in Portland. He and Elizabeth Pruden Kelley were married in 1950; they later had three children. After passing the Oregon Bar exam in 1952, Crookham practiced law in Portland before being appointed to the Multnomah County Circuit Court by Governor Mark O. Hatfield in 1962. He served as a trial judge on that court until 1988, serving as presiding judge from 1978 to 1985. In 1992, he was appointed by Governor Barbara Roberts to serve as Oregon attorney general. He chose not to run for re-election the next year. He died in 2004.

This oral history interview with Charles S. Crookham was conducted by Charles Digregorio in Portland, Oregon, on November 25, 1978. In this interview, Crookham discusses his family background and early life in Portland. He briefly talks about his service in the U.S. Army during World War II, including his training and fighting in France under General George Patton. He mentions studying law at Stanford University and Northwestern College of Law, then speaks about practicing law in Portland. He then discusses serving as a trial judge on the Multnomah County Circuit Court; his stance on capital punishment; equity of the administration of justice; and some of the sentences he has handed down. He closes the interview by talking about his wife, Elizabeth Kelley, and their children.

Joint copyright for this interview is held by the Oregon Historical Society and the estate of Charles S. Crookham. Use is allowed according to the following statement: In Copyright – Non-Commercial Use Permitted: http://rightsstatements.org/vocab/InC-NC/1.0/

Incomplete transcript (17 pages) is available for in-person use at the Oregon Historical Society Research Library.