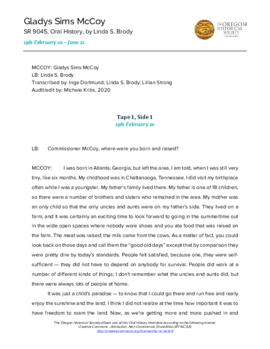 Gladys Sims McCoy was born in Atlanta, Georgia, in 1928. She grew up in Chattanooga, Tennessee, which was then part of the segregated South. She majored in sociology, with a minor in economics, at Talladega University in Alabama. After her graduation in 1949, she took a job with the YWCA in Portland, Oregon. She met Bill McCoy, who was volunteering at the YWCA at the time, and they married in 1951. She stopped pursuing a career in social work and got involved in local volunteer activities while raising seven children. She later returned to social work, pursuing a master's degree in the subject at Portland State University. After graduating in 1967, she worked for Project Head Start in Vancouver, Washington. Funding for the program was cut a few years later, and her position was eliminated. She then taught sociology at Clark College and Pacific University. She became the first black person elected to public office in Oregon in 1970, when she began serving on the Portland Public Schools board. She served on that board until 1978. She was involved with Bob Straub's successful 1975 campaign for Oregon governor and subsequently served as an ombudsman for Straub. She resigned in 1977 and ran for Multnomah County commissioner, serving from 1979 to 1984. She then served as Multnomah County Chair from 1987 until her death in 1993.

This oral history interview was conducted by Linda S. Dodds at the Multnomah County Courthouse in Portland, Oregon, from February 20 to June 22, 1981. At the time of the interview, Dodds' name was Linda S. Brody.

In this interview, McCoy discusses her early life on a farm during the Depression in Chattanooga, Tennessee, including the impact that segregation had on her childhood, her education, and her early jobs. She then discusses attending Talladega University in Alabama, including the experience of having an international faculty and thereby an integrated community in the heart of the segregated South. She also talks about studying sociology. She describes seeking employment in the field of social work and accepting a job in Portland, Oregon, as assistant teenage program director at the YWCA. She discusses differences in the ways the black population was treated in Portland compared to her experiences in the South. She describes meeting Bill McCoy and their subsequent marriage, giving up her career to stay at home, and later pursuing a career again after raising seven children over the course of 17 years. She talks about attending Portland State University as an older student and the difficulty of finding child care. She then describes her work with Project Head Start in Vancouver, Washington; teaching sociology and counseling students at Clark College; and teaching sociology at Pacific University in Forest Grove.

McCoy discusses her involvement in local politics. She talks about serving on the board of Portland Public Schools, including her campaign and programs to improve schools. She speaks at length about the board's efforts to implement middle schools, and the opposition the idea faced. She talks about her involvement with Bob Straub's successful 1975 campaign for Oregon governor and serving as an ombudsman for the governor, as well as some of the cases she investigated. She talks about her 1978 campaign for Multnomah County commissioner. She describes some of her work as commissioner, the types of complaints she received, and her support for city-county consolidation. She closes the interview by discussing her philosophy of life.