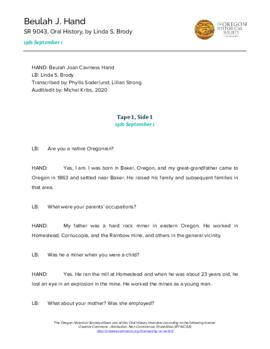 Beulah Joan Caviness Hand was born in Baker, Oregon, in 1917. Her family moved to Portland, Oregon, around 1927. She majored in biology at Reed College for a year but had to quit due to financial hardship. She met Orville Floyd Hand, known as Floyd Hand, during her studies at Reed, and they married in 1937. After their marriage, she continued to take courses in biology at Reed College as a special student for another two years, but, again, financial hardship prevented her from finishing her degree. They settled in Portland after Floyd Hand was unable to find a job in Nevada or California. Around 1942, Floyd Hand enlisted in the Navy, and Beulah Hand traveled with him during his training. When Floyd Hand was deployed, she returned to Portland and worked in a shipyard during World War II, until Floyd Hand was reassigned stateside. She joined him in San Diego, California. In 1946, they returned to Portland, and Beulah Hand began to get involved in Oregon Democratic politics. She worked as a secretary for State Representative Richard Groener from 1956 to 1957, when she was appointed to fill the seat vacated by Tom Monaghan in the Oregon Legislature. She represented Clackamas County in the Oregon House of Representatives from 1957 to 1966. She ran for the Oregon Senate in 1966 but was defeated. She was also defeated in a second run for the Senate, as well as for secretary of state in 1970. As a private citizen, she advocated for public utility districts. She died in 2009.

This oral history interview with Beulah J. Hand was conducted by Linda S. Dodds in Milwaukie, Oregon, on September 1, 1981. At the time of the interview, Dodds' name was Linda S. Brody.

In this interview, Hand discusses her early life in Baker and Portland, Oregon, including her memories of the Depression and working at the Oregonian newspaper in Portland during high school. She then describes attending Reed College, meeting Floyd Hand and their subsequent marriage, and the difficulty Floyd had finding a job after graduating during the Depression. She discusses Floyd Hand's service in the Navy during World War II and her experience traveling with him during his training, as well as working in the Portland shipyards.

Hand discusses getting involved in politics through an attempt to save public transportation in the Portland area. She talks about her reaction to Adlai Stevenson's defeat in the 1952 presidential election. She describes becoming precinct committeewoman for the Democratic Party, and then vice-chairman, alongside Chairman Richard Groener. She describes their efforts to build the Democratic Party in Oregon. She then talks about working as a secretary for Groener after he was elected to the Oregon Legislature in 1956, and about being appointed to the House of Representatives in 1957. She describes the ways in which she and other women legislators were treated differently. She also talks about her committee assignments, particularly her work on the highway, parks, and ways and means committees. She describes some of the legislation that she worked on, particularly regarding highways and public utility districts. She speaks at length about her opposition to nuclear power. She then talks about her unsuccessful campaigns for the Oregon Senate and secretary of state. She closes the interview by talking about the prominent Democrats she worked with during her political career.

Incomplete transcript (30 pages) is available for in-person use at the Oregon Historical Society Research Library.