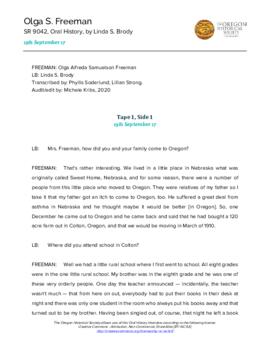 Olga Alfreda Samuelson Freeman was born in Osceola, Nebraska, in 1903. Her family moved to Colton, Oregon, in 1910. She majored in business at Oregon State University. After graduating, she taught mathematics and commercial subjects at high schools in Oregon and California. She attended the University of Washington during her summers and earned a master's degree. She then took a teaching job in Vancouver, Washington. Two years later, she and Neil Freeman were married. In 1937, the couple relocated to Eugene, Oregon, where Neil Freeman worked for the Farmers Home Administration. She worked as a substitute teacher in Eugene for about four years before being hired as a professor of mathematics at the University of Oregon in 1943. She taught there until 1949. She was elected Democratic precinct committee chair for many years before attempting a run for the Oregon Legislature in 1952. After her loss, she was elected Lane County treasurer. She then served as Lane County clerk from 1960 to 1964. She continued to be active in the Democratic Party, as well as working as a freelance writer. She died in 1997.

This oral history interview with Olga S. Freeman was conducted by Linda S. Dodds in Eugene, Oregon, on September 17, 1981. At the time of the interview, Dodds' name was Linda S. Brody.

In this interview, Freeman discusses her early life on a farm in Colton, Oregon; attending Oregon State University; and working as a math teacher in Oregon and California. She then talks about settling in Eugene after her marriage to Neil Freeman, and about teaching mathematics at the University of Oregon from 1943 to 1949. She discusses how her involvement in Lane County politics began with a Democratic speechwriting contest in which she took second place, losing to future U. S. Rep. Edith Green. She talks about serving as precinct committee chair, her involvement with the League of Women Voters, and running for the Oregon Legislature in 1952. She discusses her reasons for joining the Democratic Party and her campaign for Lane County treasurer. She speaks at length about her accomplishments as treasurer. Freeman talks about feeling as if the county commissioners didn't hold the office of treasurer in high esteem and how that pushed her to run for Lane County clerk in 1960. She discusses her accomplishments as county clerk, then describes how the office of county clerk was changed to an appointed position rather than elected, which led to her losing the position. She closes the interview by talking about her activities during retirement, including freelance writing.

Handwritten index (1 page) is available for in-person use at the Oregon Historical Society Research Library.