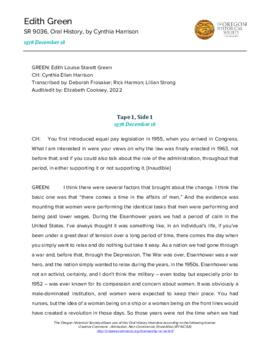 Edith Louise Starrett Green was born in South Dakota in 1910. Her family moved to Oregon in 1916. She attended Willamette University for two years, but was unable to graduate due to financial hardship. She completed her degree at the University of Oregon in 1939. A schoolteacher turned politician, Green actively participated in Democratic Party politics. She represented Oregon's 3rd District in the U.S. House of Representatives from 1955 to 1974. She chaired the Oregon delegation to the Democratic National Conventions in 1960 and 1968. Green served on the Committee on Education and Labor and other House committees, and was appointed by President John F. Kennedy to the President's Commission on the Status of Women. She championed the Equal Pay Act of 1963 and was instrumental in passing major education legislation, including the National Defense Education Act (1958), the Higher Education Facilities Act (1963), and the Higher Education Acts of 1965 and 1972 that included legislation enforcing gender equality in public education (Title IX). Upon her retirement from Congress, she taught government at Warner Pacific College in Portland. She also served on the Oregon Board of Higher Education. Green died in 1987.

This oral history interview with Edith Green was conducted by Cynthia Harrison in Portland, Oregon, on December 18, 1978. In this interview, Green discusses her legislative record on women's rights, including the equal pay act of 1963, Title IX, and the Equal Rights Amendment. She speaks about the opposition such legislation faced and how public opinion regarding women's rights has changed over time. She also discusses serving on the Commission on the Status of Women and the report that commission produced. She talks about her impression of the respect for women held by presidents John F. Kennedy and Lyndon B. Johnson. She discusses her efforts toward greater access to loans for higher education and the way that has helped foster the progress of women's rights. She closes the interview by discussing her effort to open the Job Corps program to women.