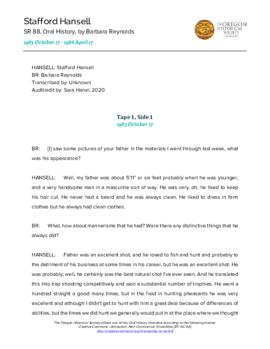 Marion Stafford Hansell was born just outside Athena, Oregon, in 1913. He grew up on a farm in Umatilla County, Oregon. As a child, he contracted both diphtheria and polio, which resulted in long-term health problems. He studied prelaw at the University of Montana, then transferred to Whitman College in his junior year and changed his major to economics. He graduated in the spring of 1937. He met Mary Elizabeth Ennis while at Whitman College. They married in 1937 and adopted a son, John Stafford Hansell, in 1947. They settled in Umatilla County, and Stafford Hansell worked on his father's farm. He later ran a hog farm with his brother, Bill Hansell. He was elected to his local school board and served from 1943 to 1957. He represented Umatilla County in the Oregon House of Representatives from 1957 to 1974 and was an early advocate for the decriminalization of marijuana. After he left the Legislature, he served on various committees for the Bob Straub and Norma Paulus administrations. He died in 1995.

This oral history interview with Stafford Hansell was conducted by Barbara Reynolds from October 17 to November 15, 1983, and in June 1986. In the interview, Hansell discusses his family history and early life on a farm in Umatilla County, Oregon, including having diphtheria and polio as a child and the long-term effects on his health. He also talks about his education at the University of Montana and Whitman College, including his involvement in athletics and drama. Hansell talks about the early years of his marriage to Mary Elizabeth Ennis; making ends meet during the Depression; farming with his father; hog farming with his brother, Bill; and adopting his son, John. He also discusses serving on his local school board from 1953 to 1957, including implementing kindergarten and increasing school funding. Hansell then discusses his involvement with the Republican Party and representing Umatilla County in the Oregon House of Representatives from 1957 to 1974. He discusses legislation on land-use planning, taxation, labor, reapportionment, education, agriculture, and marijuana. He also discusses his failed bid to become Speaker of the House in the 1967 session, as well as many of the representatives he served with. Hansell also discusses his role on the Ways and Means Committee; the Boeing Space Age Park and Boardman; salary increases for legislators; and the Mark Hatfield and Tom McCall administrations. He speaks briefly on his feelings regarding the impeachment of President Richard Nixon. He also talks about working for the administrations of Governors Bob Straub and Norma Paulus after leaving the Legislature, including serving on the Oregon Liquor Commission, the State Board of Education, and the Governor's Taskforce on Land Use Planning. He also discusses the Rajneeshees. Hansell closes the interview by talking about his personal life and family, as well as his involvement with the Oregon Historical Society and his interest in Native American cultures and art.