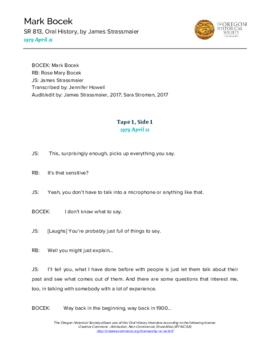 Mark Bocek was born in Galicia, Poland, in 1887. He immigrated to the United States in 1905 and first settled in Pennsylvania. He enlisted in the Army in 1909 and was stationed in the Philippines from 1910 to 1912. He also played clarinet in the U.S. Army band. In 1914, he and Rose White were married; they later had four children. In 1918, he became a naturalized U.S. citizen. He was discharged from the Army in 1920, and he and his family settled in Portland, Oregon. He worked at a meat market in downtown Portland for part of his life, and briefly worked for Iron Fireman building engines for Liberty ships during World War II. He died in 1984.

In this interview, Bocek discusses his family background and early life in Poland. He talks about immigrating to the United States in 1905 and describes his experience as an immigrant in Pennsylvania and New York, including the jobs he worked. He talks about serving in the U.S. Army beginning in 1909, and describes spending 18 months stationed in the Philippines and playing clarinet in the Army band. Bocek and Strassmaier also talk about some photographs of Bocek's time in the U.S. Army. He briefly discusses his marriage to Rose White in 1914; his activities in the Army after returning from the Philippines in 1912; and settling in Portland, Oregon. He talks about his education in Poland, the jobs he held in Portland, including during the Depression, and building engines for Liberty ships during World War II. He then talks about his children, their families, and their careers. Bocek and Rose Mary Bocek also share their memories of the Tillamook Burn. Bocek closes the interview by discussing the dedication necessary to learn how to play an instrument.