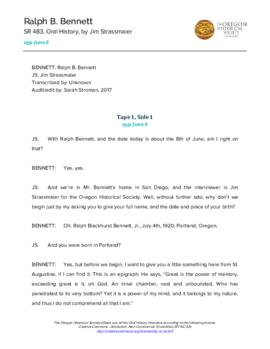 Ralph Blackhurst Bennett, Jr. was born in Portland, Oregon, in 1920. His family soon relocated to Hood River. He attended Harvard University. During World War II, he served in the American Field Service and drove ambulances, mostly in India. After the war, he briefly owned The Optimist newspaper in The Dalles, Oregon. He worked in public relations for the Bonneville Power Administration from 1946 to 1947. In 1947, he and Anna Lou McClain were married; they later had three children. The couple lived in Vanport during the 1948 flood. From 1948 to 1952, Bennett worked as a reporter for the Wenatchee Daily World in Ephrata, Washington. In 1952, he and his family moved to San Diego, California, where he continued to work as a journalist. He died in 2002.

This oral history interview with Ralph B. Bennett was conducted by Jim Strassmaier at Bennett's home in San Diego, California, on June 8, 1991. In this interview, Bennett discusses his family background. He talks about taking over The Optimist, a newspaper run by his father, Ralph B. Bennett, Sr., in The Dalles, Oregon. He talks about campaigning for public power and working with then-lawyer Gus Solomon, and how that led to him working for the Bonneville Power Administration. He then discusses his experience at Harvard University, including working on the student newspaper and his views about World War II before 1942. He also describes his political philosophy. He discusses working in public relations for the Bonneville Power Administration from 1946 to 1947, including people he worked with, his association with Woody Guthrie, and his work promoting public power. He also talks about leftist politics in Oregon. He describes living in Vanport, including running a newsletter and his experience during the 1948 flood. He briefly talks about working as a reporter for the Wenatchee Daily World in Ephrata, Washington, and his continued advocacy for public power. He then revisits the topics of working in public relations for the Bonneville Power Administration, living in Vanport, and his political philosophy. He closes the interview by talking more about Woody Guthrie.

Copyright for this interview is held by the Oregon Historical Society. Use is allowed according to the following statement: Creative Commons - BY-NC-SA, http://creativecommons.org/licenses/by-nc-sa/4.0/. Copyright for the photographs has not been determined, and permission for use may require authorization from copyright holders.

Handwritten index (9 pages) is available for in-person use at the Oregon Historical Society Research Library.