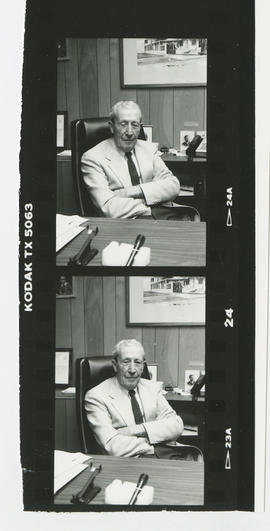 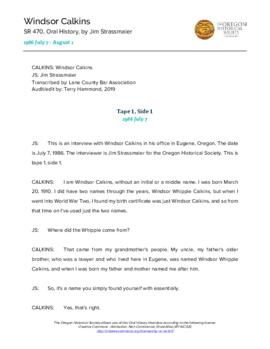 Windsor Calkins was born in Eugene, Oregon, in 1910. He met Doris Helen Patterson while in junior high school and they married in 1932. That same year, he graduated from the University of Oregon School of Law. He practiced law in Eugene for 12 years, from 1932 to 1944. He was president of the Lane County Bar Association in 1940, as well as a member of the Eugene City Health Board from 1943 to 1944. He enlisted in the U.S. Navy in 1944 and served in the Mediterranean until the end of the European conflict in World War II, then the Philippines until the end of the war. He was a part of the occupying force in Japan until his discharge in 1946. Upon his return to Oregon, he served as counsel for the Eugene Water and Electric Board. He was appointed to the senior advisory board for the Ninth Circuit Court of Appeals in 1985. He died in 1989.

This oral history interview with Windsor Calkins was conducted by Jim Strassmaier in Calkins' office in Eugene, Oregon, from July 7 to August 1, 1986. In the interview, Calkins discusses his family background and early life in Eugene, including a 1922 trip on foot from Newport to Florence, Oregon, with his father. He also discusses his father's career as a court reporter, as well as his own interest in the law. Calkins talks about studying law at the University of Oregon, including taking classes from Wayne Morse. Calkins talks about practicing law in Eugene and some of the cases he argued, including bootlegging and murder cases. He also discusses the effect the Depression had on his family. He then talks about his experiences in the U.S. Navy during World War II. Calkins also talks about notable people from Eugene, including William G. East and other judges. He then discusses his work as a lawyer for the Eugene Water and Electric Board and Sacred Heart Hospital, as well as his involvement with the Lane County Bar Association, the Eugene City Health Board, and other civic organizations. He closes the interview with a description of malpractice lawsuits, as well as his family life.