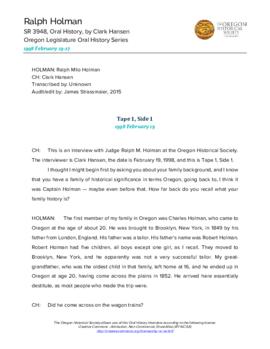 Ralph Milo Holman was born in Portland, Oregon, in 1914. He grew up on a farm in Molalla, Oregon. He attended Northwestern College of Law, graduating in 1937. That same year, he and fellow Northwestern student Louise Oesch were married. After passing the bar exam in 1937, Holman practiced law in Portland, and also worked for the state treasurer's office. He served in the U.S. Navy during World War II. After his discharge in 1946, he joined the Butler, Jack, Beckett & Holman law firm in Oregon City, and became a partner in 1948. He served as a Clackamas County Circuit Court judge from 1950 to 1966, and as an Oregon Supreme Court justice from 1966 to 1980. He died in 2013.

This oral history interview with Ralph M. Holman was conducted by Clark Hansen at the Oregon Historical Society in Portland, Oregon, and at Holman's home in Salem, Oregon, from February 19-27, 1998. In this interview, Holman discusses his family background and early life on a farm in Molalla, including his memories of the Depression, the effects of an undiagnosed case of polio, and his early education. He talks about attending the Northwestern College of Law, and his marriage to Louise Oesch. He discusses working for the state treasurer's office after graduating from law school, as well as practicing law in Portland. He then describes at length his naval service during World War II. He talks about practicing law in Oregon City, judges he argued before, and his involvement in the Republican Party.

Holman discusses serving as a judge on the Circuit Court of Oregon for Clackamas County from 1950 to 1966. He talks about judges he served with and some of the cases he heard. He then discusses serving as an Oregon Supreme Court justice from 1966 to 1980, including his campaign. He talks about his fellow justices, the difference between the Circuit Court and the Supreme Court, and the types of cases he heard. He also talks about his staff. He discusses changes in the law, sentencing guidelines, and cameras in the courtroom. He also describes the role of chief justice, as well as that of the Oregon Court of Appeals. He talks about the jury system, decisions of his that were reversed by the U.S. Supreme Court, and his judicial philosophy. He closes the interview by discussing his family life and retirement activities.

Copyright for this interview is held by the Oregon Historical Society. Use is allowed according to the following license: Creative Commons - BY-NC-SA: http://creativecommons.org/licenses/by-nc-sa/4.0/. Copyright for photograph has not been determined, and permission for use may require additional authorization from copyright holders.