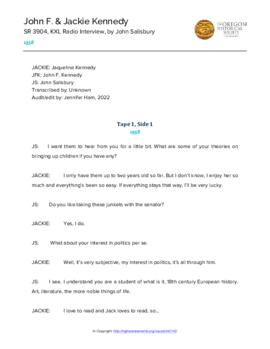 John Fitzgerald Kennedy was born in Brookline, Massachusetts, in 1917. He graduated from Harvard University in 1940 with a bachelor of arts degree in government. He served in the U.S. Navy as a patrol torpedo boat commander in the Pacific theater during World War II. After the war, he worked briefly as a reporter for Hearst Newspapers. He was a member of the Democratic Party and represented the 11th district of Massachusetts in the U.S. House of Representatives from 1947 to 1953. In 1952, he was elected to the U.S. Senate, and the next year he and Jacqueline "Jackie" Lee Bouvier were married. Kennedy was elected the 35th president of the United States in 1960. He was assassinated in Dallas, Texas, in 1963.

Jacqueline "Jackie" Lee Kennedy Onassis, nee Bouvier, was born in Southampton, New York, in 1929. She attended Vassar College in 1947 and then studied abroad through Smith College at the University of Grenoble and at the Sorbonne in Paris, France, from 1949 to 1950. She completed her undergraduate studies at George Washington University in Washington, D.C., earning as bachelor of arts in French literature in 1951. She and John F. Kennedy were married in 1953. She was the first lady of the United States from 1961 until Kennedy's assassination in 1963. In 1968, she and Aristotle Onassis were married. After Aristotle Onassis's death in 1975, she worked as book editor for Viking and Doubleday. She died in 1994.

This interview with John F. Kennedy and Jackie Kennedy was conducted by John A. Salisbury for broadcast on the Portland, Oregon, channel KPTV in 1958. In this interview, Jackie Kennedy discusses their family life and recreational activities. John F. Kennedy talks about Jimmy Hoffa and labor unions. He addresses the controversy surrounding his Catholicism and youth. He discusses his experience meeting Oregonians.

Salisbury closes the interview with thanks to the Kennedys for appearing on his program, a commercial for Ovaltine, and an explanation of the changes in Oregon laws regarding primaries. A commercial for SafeCo Insurance plays, followed by a message regarding Oregon election laws from Oregon Secretary of State Howell Appling and Governor Mark Hatfield. The recording ends with a commercial for an allergy nasal spray.