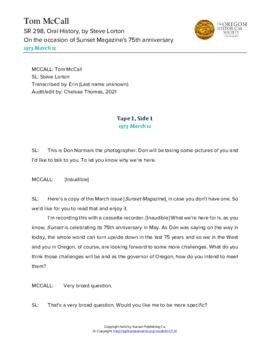 Thomas Lawson McCall was born March 22, 1913, in Egypt, Massachusetts. He moved with his parents to Portland, Oregon, in 1919 and soon after to a ranch near Prineville. He graduated from the University of Oregon with a degree in journalism in 1936, and went on to work at newspapers in Moscow, Idaho, and at the Oregonian in Portland. He and Audrey Owen married in 1939, and they later had two sons. McCall served as a war correspondent in the U.S. Navy during World War II, then worked in broadcasting until 1964, hosting a radio talk show on Portland station KEX. He became involved in politics as early as 1949, when he worked as Governor Thomas McKay's assistant. He ran for the U.S. House of Representatives in 1954, but lost to Edith Green. He later served as Oregon secretary of state from 1965 to 1967, when he began his first term as Oregon governor. He served two terms, from 1967 to 1975. McCall's progressive Republican administration was known for its attention to public concerns and the quality of life in the state. He promoted strong land use laws and environmental regulations, and he sought, unsuccessfully, to limit growth. After leaving office, he returned to broadcast journalism and continued his environmental advocacy. In 1978 he was defeated in a bid for the governorship by Victor Atiyeh. McCall died in 1983.

This oral history interview with Oregon Governor Tom McCall was conducted by Steve Lorton on March 12, 1973, and was one of a number of interviews with governors of Western states on the occasion of Sunset Magazine's 75th anniversary. McCall describes his experiences in government and politics, along with challenges including growth and conservation in Oregon. He mentions members of the Oregon Legislature, including Bob Packwood, Keith Miller, Daniel Evans, Cecil Andrus, and Richard Neuberger. He also discusses legislation that was forthcoming at the time of the interview, including the Oregon Bottle Bill. He closes the interview by discussing his plans for Oregon's future.

index (3 pages) available for in-person use at the Oregon Historical Society Research Library.