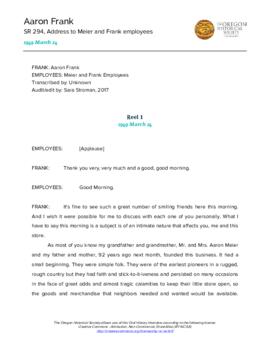 Aaron Meier Frank was born in Portland, Oregon, in 1891. He graduated from the University of Oregon law school in 1913 and was admitted to the Oregon State Bar that same year. A member of Portland's prominent Meier and Frank families, Frank soon became involved in the family store, Meier & Frank. In 1916, he and Ruth R. Rosenfeld were married; they later had two children. Frank became assistant manager of the Meier & Frank Department Store in 1922. In 1930, after Meier & Frank President Julius Meier was elected Oregon governor, Frank became the company's vice president and general manager. After Julius Meier's death in 1938, Frank became president of the store, a position he held until his retirement in 1964. He died in 1968.

This speech was delivered by Aaron M. Frank on March 24, 1949, at the Meier & Frank Department Store in Portland, Oregon. In this speech, Frank urges the assembled store employees to resist union organizing efforts. He enumerates the benefits provided to employees by Meier & Frank, gives examples of management and employee loyalty, lists his responsibilities as director, and makes a plea for an employee vote of confidence. The employees ultimately voted against unionization.