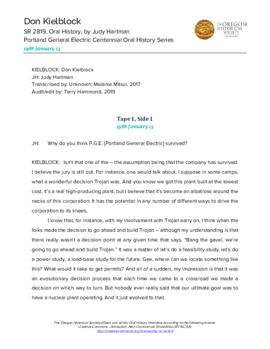 Donald F. Kielblock was born in Corvallis, Oregon, in 1941. In 1961, he earned a business degree from Portland State Univesity. He joined Portland General Electric in 1968 as a meter reader. During his career at PGE, he worked as a permit agent, as manager of information systems in the nuclear division, in human resources, and ultimately as vice president of the company. He also served as chair on the Salvation Army board. He retired in 1998.

This oral history interview with Don Kielblock was conducted by Judy Hartman on January 13, 1988. The interview was conducted as part of the Portland General Electric Centennial Oral History Series, which marked PGE's 100th anniversary and was used in the writing of the book "Electrifying Eden." The audio for this interview is incomplete, but the entire interview is included in the transcript.

In this interview, Kielblock discusses the strategic planning behind the Trojan Nuclear Power Plant. He talks about the early operation of the plant, navigating the early nuclear power regulations, and how public opinion regarding the plant has changed. He describes experiencing protests against Trojan. He talks about working with the Nuclear Regulatory Commission; about the staff at Trojan; and about changes in PGE company culture. He also talks about changes in public opinion regarding PGE. He describes his job duties as a permit agent during his early career with PGE; talks about his involvement with the employee union; and laments the different expectations that newer employees have for the company. He closes the interview by sharing his thoughts about the future of PGE.