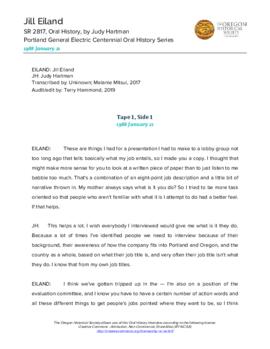 Jill Wissler Eiland, nee Jill A. Wissler, was born in Portland, Oregon, in 1951. In 1973, she earned a bachelor's degree in business from Oregon State University. She pursued a career in politics and worked on the staff of Senator Bob Packwood in Washington, D.C. In 1981, she earned a master's degree in business administration from George Washington University. In 1982, she joined Portland General Electric as director of federal affairs, and continued to work in Washington, D.C., lobbying Congress for PGE. She returned to Oregon in 1985, and in 1990, she became director of public affairs for PGE. From 1994 to 1997, she served as vice president and managing partner for The Rockey Company. From 1997 to 2006, she was senior director of government relations for Kindercare Learning Centers. In 2004, she joined the Knowledge Learning Corporation as vice president of corporate communications. In 2006, she became public affairs director for the Intel Corporation in the Northwest Region. In 2017, she joined Gallatin Public Affairs as a managing partner and became senior counsel in 2020.

This oral history interview with Jill Eiland was conducted by Judy Hartman on January 21, 1988. The interview was conducted as part of the Portland General Electric Centennial Oral History Series, which marked PGE's 100th anniversary and was used in the writing of the book "Electrifying Eden."

In this interview, Eiland discusses her work as director of federal affairs at Portland General Electric. She describes her job duties, including lobbying the U.S. Congress; talks about the people who had previously held her position; and discusses how the job has changed. She talks about some of the legislation PGE lobbied for and against. She also discusses PGE's relationship with Native American communities. She then talks about her decision to leave Washington, D.C., in 1985 to return to Oregon, and discusses how her job duties changed. She closes the interview by talking about philanthropic work and volunteering in the Portland community by PGE employees; about public opinion of PGE; and about how the Trojan Nuclear Power Plant sets PGE apart from other electric utilities.