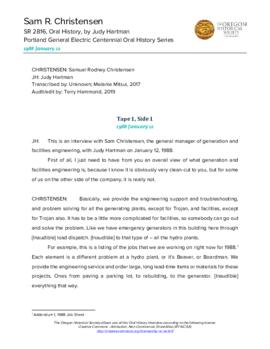 Samuel Rodney Christensen was born in Hillsboro, Oregon, in 1928. He earned degrees in business and engineering from Oregon State University. In 1953, he and Greta Ann Olsen were married; they later had three children. He joined Portland General Electric in 1956 as an engineer, ultimately working his way up to general manager of Generation & Facilities Engineering. In 1985, he and Roxie June O'Brien were married. He died in 2009.

This oral history interview with Sam R. Christensen was conducted by Judy Hartman on January 12, 1988. The interview was conducted as part of the Portland General Electric Centennial Oral History Series, which marked PGE's 100th anniversary and was used in the writing of the book "Electrifying Eden."

In this interview, Christensen discusses his career at Portland General Electric as an engineer. He describes his job duties and the organizational structure of PGE's engineering departments, and he talks about the construction of several of PGE's hydroelectric plants. He also talks about the construction of the Trojan Nuclear Power Plant and the uncompleted construction of the Pebble Springs nuclear power plant. He discusses how PGE as a company has changed during his career, the maintenance of PGE's power plants, and his thoughts on the future of the company.

The interview transcript includes two addendums: a 1988 list of jobs the PGE engineers were currently working on, and a 1988 article entitled "Dimming our Electric Future."