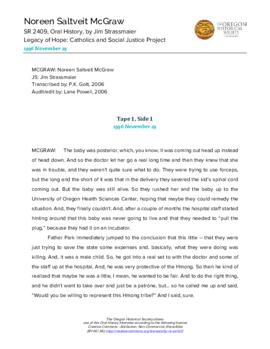 Noreen Saltveit McGraw, nee Noreen Ann Kelly, was born in 1934. She attended Marylhurst University in 1952, then graduated from the University of Oregon with a bachelor of science in law degree in 1953. She earned a juris doctorate from the University of Oregon in 1955. She soon entered into law practice in Medford, Oregon, with her father, Edward Cantwell Kelly, who later became a Jackson County Circuit Court judge. During this time, she also served as a municipal judge in Medford from 1957 to 1959. In 1960, she moved to Portland, where she was assistant attorney general with the Oregon Department of Justice under Robert Y. Thornton. That same year, she and fellow lawyer Carl Saltveit were married; they later had four children. She left the attorney general's office in 1966 and re-entered private law practice in Portland. In 1969, she earned a bachelor's degree in Spanish from the Portland State University, and in 1992, a bachelor's degree in French. While in private practice, she also served as a district judge pro tempore from 1972 to 1976. She served on the boards of the Oregon Bar Governors, the Oregon Women Lawyer's Association, and the Multnomah Bar Association. McGraw has been a panel member on the United States Arbitration and Mediation Service, the Portland Arbitration Service, and the Oregon Employee Relations Board. She has served as a reference judge for Multnomah County since 1992.

This oral history interview with Noreen Saltveit McGraw was conducted by Jim Strassmaier on November 29, 1996, as part of the Legacy of Hope: Catholics and Social Justice Project. In this interview, McGraw discusses representing the Hmong community, with the help of Reverend Morton Parks, in a case where a baby's spinal cord had been severed during delivery. McGraw mediated the dispute over whether to continue life support.

Forms part of the Legacy of Hope: Catholics and Social Justice Project.