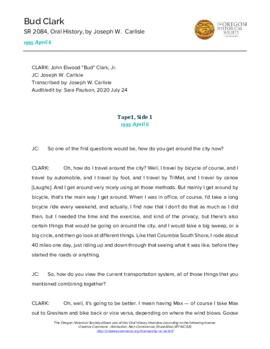 John Elwood "Bud" Clark, Jr. was born in Idaho in 1931. His family moved to Oregon in 1937. He attended Vanport College (now Portland State University), then served in the Marine Corps from 1951 to 1954. After leaving the Marine Corps, he attended Reed College, but dropped out during his junior year. In 1961, he purchased the Drop In Tavern in Portland, Oregon, which he renamed the Spoutin' House, but was forced to close in 1967 as a result of urban renewal policies. He then purchased Ann's Tavern, renaming it the Goose Hollow Inn. In 1964, he and Sigrid Fehrenbacher, a violinist with the Oregon Symphony, were married. Clark adopted her son, and they later had more three children. He served as mayor of Portland from 1984 to 1992.

This oral history interview with Bud Clark was conducted by Joseph W. Carlisle on April 6, 1995. The equipment used to record this interview was faulty, causing the tape speed to vary widely. Digitized audio files made from the recording have been adjusted for ease of listening.

In this interview, Clark discusses transportation in Portland, including bicycles and the public transportation system, TriMet. He focuses particularly on the construction of the TriMet light-rail system, MAX. He discusses outdoor recreation in Portland. He then talks about his family background and early life in Portland. He also discusses his experiences at Vanport College (now Portland State University) and at Reed College. He talks about the livability and climate of Oregon, particularly the city of Portland.

Clark discusses the impact of urban renewal on Portland. He discusses running the Drop In Tavern, which he renamed the Spoutin' House; the tavern's location near Portland State University; and how urban renewal forced him out of business. He then talks about purchasing Ann's Tavern, which he renamed the Goose Hollow Inn. He speaks at length about his opinion of urban renewal at the time it was happening in the 1950s and 1960s, and his opinion of it in retrospect. Clark closes the interview by briefly discussing the urban renewal policies he put in place as mayor of Portland from 1984 to 1992.

Copyright is held by the Oregon Historical Society. Use is allowed according to the following license: Creative Commons - BY-NC-SA: http://creativecommons.org/licenses/by-nc-sa/4.0/

Incomplete transcript (25 pages) is available for in-person use at the Oregon Historical Society Research Library.