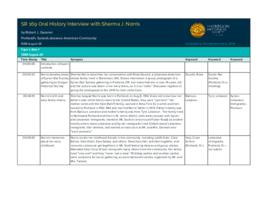 Sherma Jwayad Norris, nee Sherma Sharr, was born in Portland, Oregon, in 1914. In 1935, she and Nicholas Jacob Jwayad were married; they later had three children. She was a founding member of the St. Sharbel Parish in Southeast Portland, and she managed the bookstore on the Portland Community College Cascade campus. Nicholas Jwayad died in 1976. Sherma Jwayad retired in 1978, and in 1979 she and Marvin Norris were married. Norris died in 1997.

This oral history interview with Sherma J. Norris was conducted by Robert J. Gassner on August 26, 1988. The interview was one of a series conducted in 1988 by Oregon Historical Society volunteer Robert Gassner with members of the Syrian and Lebanese community in Portland, Oregon.

In this interview, Norris discusses donating a photograph to the Oregon Historical Society. She then talks about her family background and early life in Portland, Oregon, as part of the Syrian and Lebanese community. She discusses Syrian and Lebanese clubs and organizations, including the Syrian Star Society, which later became the Syrian-Lebanese Social Club; and talks about Lebanese- and Syrian-owned businesses in Portland, particularly those run by her family. She briefly outlines the events of her life. She talks about her education at St. Mary's Academy and her childhood friends. She talks about her involvement in the Republican Party and support of Governor Victor Atiyeh; the members of the Syrian and Lebanese community that were friends with her parents; and speaking Arabic at home as a child. She speaks at length about her family, siblings, and children. She closes the interview by describing a recent trip she took with her daughter.

The photograph discussed in this interview is included in Photo File 1278-88, Oregon Historical Society Research Library. The photograph, taken circa 1930, shows the Syrian Star Society at the society's clubhouse at SE 62nd and Francis, Portland, Oregon.