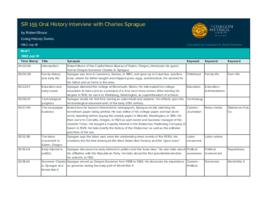 Charles Arthur Sprague was born in Lawrence, Kansas, on November 12, 1887. He attended Monmouth College in Illinois, where he was editor of the college newspaper. After his graduation in 1910, he became superintendent of schools in Waitsburg, Washington. He and Blanche Chamberlain were married on August 8, 1912, and they later had two children. In 1915, Sprague purchased the local paper, the Ritzville Journal Times. In 1925, he moved to Oregon, where he was business manager for the Corvallis Gazette-Times. In 1929, he purchased a two-thirds interest in the Oregon Statesman in Salem and was its editor and publisher for 40 years. He was a Republican and was elected governor of Oregon, serving from 1939 to 1943. He died in 1969.

This interview with Charles A. Sprague was conducted by Robert Bruce of the Capitol News Bureau in Sprague's office at the Oregon Statesman in Salem on July 18, 1962. It was broadcast on the radio as part of the Living History Series. In the interview, Sprague briefly discusses his family history and early life in the Midwest. He then talks about his career in journalism and ownership of the Corvallis Gazette-Times and the Statesman, as well as big news stories during that time, including the labor movement. Sprague also discusses his involvement with the Republican Party and his term as governor of Oregon during World War II. He also talks about landmark legislation that was passed during his term, particularly the establishment of the state forest system, as well as his thoughts on amending the Oregon Constitution. He closes the interview with a discussion about contemporary American culture.