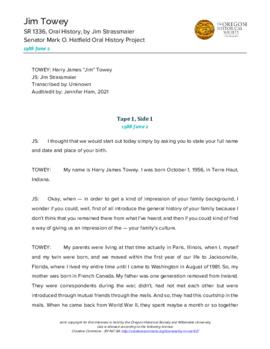 This oral history interview with Jim Towey was conducted by Jim Strassmaier on June 2, 1988. In this interview, Towey discusses his family background and early life in Jacksonville, Florida, including his Catholic upbringing. He talks about studying law at Florida State University, including working summer jobs and playing basketball. He then discusses his decision to forgo the practice of law and instead follow a spiritual calling to Washington, D.C. He describes how he came to be part of U.S. Senator Mark Hatfield's staff in 1982; his duties as a legislative assistant and later legislative director; and some of the other members of the senator's staff. Towey relates a few anecdotes regarding Hatfield's personality and spirituality. Using abortion legislation as an example, he describes the way the staff would engage with Hatfield on specific legislation and how the senator made decisions. He also describes working on improving conditions for refugees and the abuses he witnessed, as well as his feelings on President Ronald Reagan's agenda in general. Towey speaks at length about a real estate scandal during Hatfield's 1984 re-election campaign and how they dealt with it. He closes the interview by discussing Hatfield's spiritual life.

Joint copyright for this interview is held by the Oregon Historical Society and Willamette University. Use is allowed according to the following license: Creative Commons - BY-NC-SA: http://creativecommons.org/licenses/by-nc-sa/4.0/

Incomplete transcript (99 pages) is available for in-person use at the Oregon Historical Society Research Library.