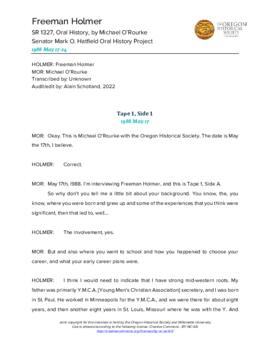 Adolph Freeman Holmer was born in St. Paul, Minnesota, in 1917. He graduated from high school in Fargo, North Dakota. He attended Concordia College in Moorhead, Minnesota, and earned a bachelor's degree in history and political science in 1939. He then came to Eugene, Oregon, where his family had moved some years earlier, and he studied at the University of Oregon. While a graduate student, he met Marcia Kathleen (her surname prior to marriage is unknown). They married in 1942 and later had two children. He served in the U.S. Army during World War II. After his discharge in 1945, he completed his master's degree at the University of Oregon in 1946, then pursued a doctorate at Columbia University in New York City, but never completed his dissertation. Instead, he returned to Eugene in 1949 to accept a position as professor of political science at Willamette University, where he taught until 1959. It was during his tenure at Willamette that he met Mark Hatfield. Holmer held numerous governmental positions in Oregon, including director of elections from 1957 to 1959 and director of the Department of Finance and Administration from 1959 to 1966. He was also Wisconsin's director of environmental protection from 1966 to 1968. He then returned to Oregon, where he served as vice chancellor of the state System of Higher Education, based in Eugene. He served on the Eugene City Council from 1983 to 1991. He died in 2009.

This oral history interview with Freeman Holmer was conducted by Michael O'Rourke from May 17-24, 1988, as part of the Senator Mark O. Hatfield Oral History Project. The interview was conducted in two sessions. A transcript is available.

In the second interview session, conducted on May 24, 1988, Holmer discusses Hatfield's relationship with other prominent Oregon politicians, including Tom McCall, as well as members of the business community. He discusses Hatfield's position on some controversial issues, particularly the Vietnam War. He then describes his own efforts toward Oregon's economic development; Hatfield's keynote address at the 1964 Republican National Convention; and attending governors' conferences. Holmer then discusses his activities since leaving Hatfield's staff when Hatfield was elected to the U.S. Senate in 1966. He talks about serving as director of environmental protection for the state of Wisconsin from 1966 to 1968. He closes the interview by discussing his continued relationship with Hatfield.

Joint copyright for this interview is held by the Oregon Historical Society and Willamette University. Use is allowed according to the following license: Creative Commons - BY-NC-SA: http://creativecommons.org/licenses/by-nc-sa/4.0/