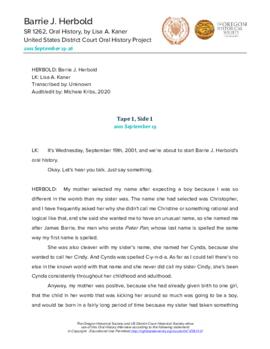 Barrie Jane Herbold was born in Bethesda, Maryland, in 1949. She graduated from the University of Pennsylvania with a bachelor's degree in 1971. She then came to Portland, Oregon, where her parents had moved some years before, and attended the University of Oregon Law School. She earned her law degree in 1977. That same year, she and David Powell were married; they later had two children. Herbold became the first woman trial attorney at the Portland law firm of Dusendorf, Spears, Lubersky, and in 1983 she formed the law firm Markowitz and Herbold. She practiced law in all areas of civil litigation, with an emphasis on employment-related claims. She was a frequent lecturer for the Oregon State Bar, the Federal Bar, the Multnomah County Bar Association, Oregon Women Lawyers, and other groups. She volunteered with the Senior Law Project for 20 years, and was a founding member of Justice Endorsed by Women Lawyers. In 1991, Herbold and David Powell divorced. From 1996 to 1999, she served on the Oregon State Bar's Board of Governors. In 1999, she became the second woman in Oregon to be elected to the American College of Trial Lawyers. That same year, she and Bill Gross were married. She died in 2001, four years after being diagnosed with breast cancer.

This oral history interview with Barrie J. Herbold was conducted by Lisa A. Kaner from September 19-26, 2001. In this interview, Herbold discusses her family background and early life, including moving around often due to her father's Navy career. She speaks briefly about attending the University of Pennsylvania and the University of Oregon Law School, and about the sexism women college students faced. She talks about practicing law in Portland, Oregon, including her experience as the first woman trial attorney at the Dusendorf, Spears, Lubersky law firm. She describes starting a law firm with Dave Markowitz, the lawyers she hired, and cases she handled.

Incomplete transcript (43 pages) is available for in-person use at the Oregon Historical Society Research Library.