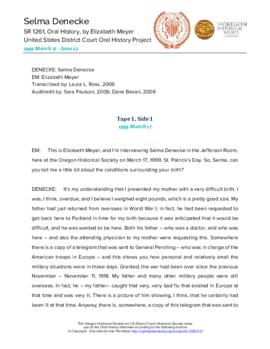 Selma Jane Denecke, nee Rockey, was born in Portland, Oregon, in 1919. She attended Scripps College in Claremont, California. After her graduation in 1941, she returned to Portland and worked at the Portland Art Museum until 1945, when she and Arno H. Denecke were married. They later had five children. She was a volunteer with the Albertina Kerr Center, the Portland Art Museum and the Oregon Historical Society. She died in 2009.

This oral history interview with Selma J. Denecke was conducted by Elizabeth Meyer at the Oregon Historical Society in Portland, Oregon, from March 17 to June 23, 1999. In this interview, Denecke discusses her family background and early life in Portland, Oregon, including her early education and her memories of the Depression. She also talks about her interest in art and music and attending Scripps College in Claremont, California. She talks about working at the Portland Art Museum during World War II. She discusses meeting Arno H. Denecke and their subsequent marriage. Denecke describes Arno Denecke's service in the U.S. Army in Europe during World War II, as well as their long-distance courtship. She talks about Arno Denecke's career from professor at the University of Oregon Law School to chief justice of the Oregon Supreme Court. She discusses raising a family, as well as the prenatal and maternity care she received.